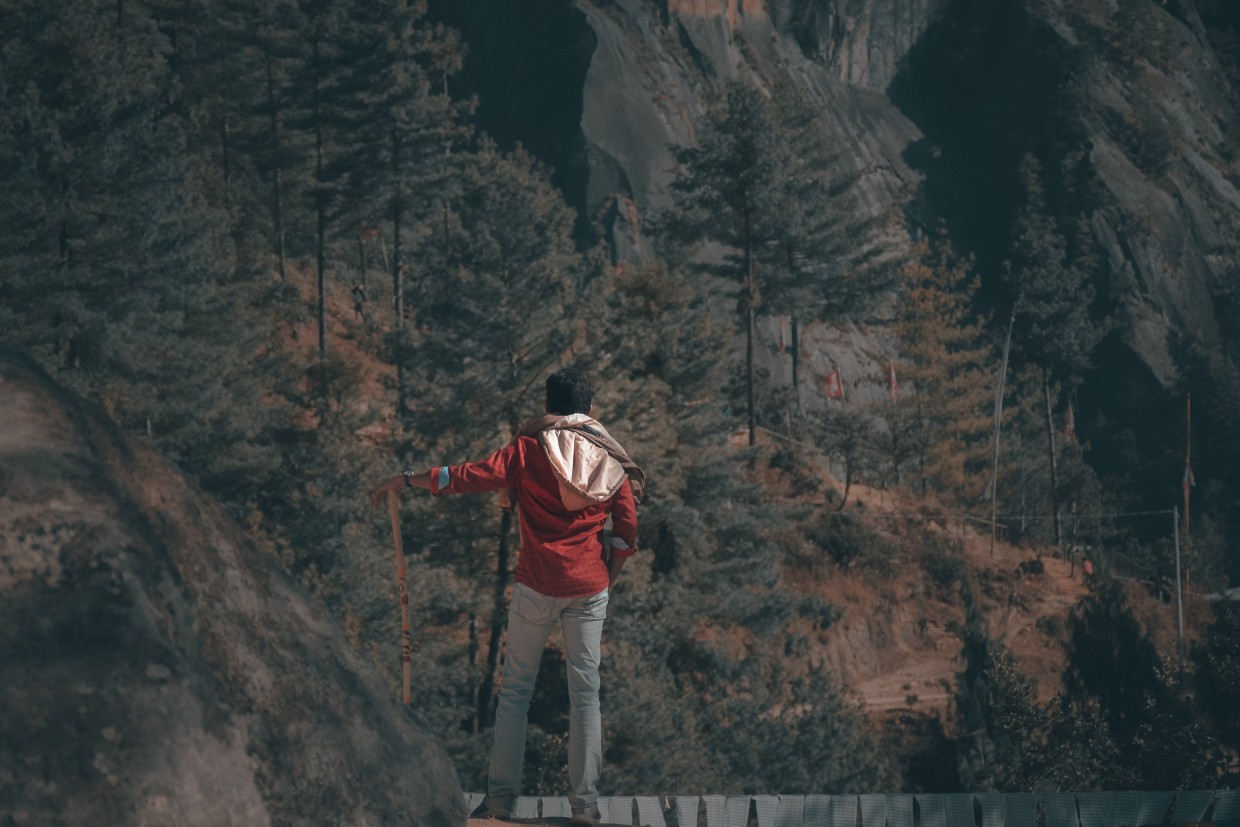 If your boots were made for a little bit more than just walking, Bhutan is probably already at the top of your bucket list –and rightfully so. Nicknamed the ‘mountain fortress of the gods’, Bhutan is arguably made up of the most elusive and diversified stretch of the majestic Himalayan mountains.

One of the world’s top 10 designated global biodiversity hotspots, Bhutan has over 70% of its surface blanketed by fir, chirpine and hardwood forests. It’s also one of the few countries worldwide with a forest cover steadily growing rather than declining.

Peek between the wispy evergreen or hardwood branches, and you’ll find even more variety.This is the land where yaks roam through meadows of medicinal plants (Bhutan has over 300) and over 400 bird species soar across the country’s landscapes, which range from mountainous and glacial to wetlands.

Stop to smell one of Bhutan’s 46 species of colourful rhododendrons, and you might just find the flowers already occupied by one of the 600+ butterfly species that also make the country their home. Of the 200 mammals living in the country, 27 are endangered. Several are also dangerous (think Bengal tigers, Himalayan black bears and leopards), so be sure to head out with an expert guide.

Hiking Bhutan is the best way to fully experience this stupendous country in all its natural and cultural glory. Even if you’ve experienced the marvellous mountains of Bhutan already or if you’re a beginner-level hiker, there’s always a new trek waiting to be traversed –and a new yak’s milk cheese waiting to be tasted. 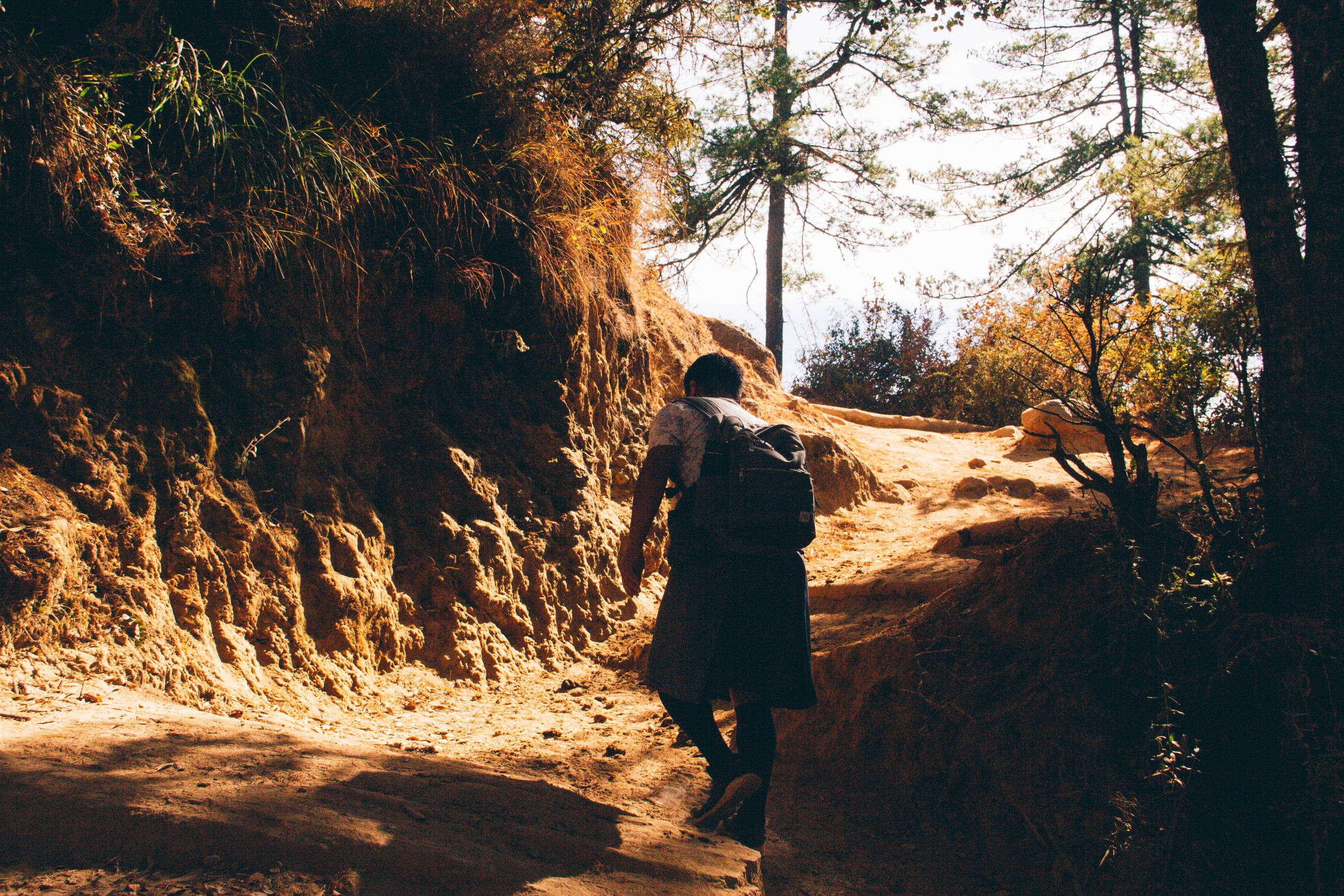 The Nabji Korphu encompasses a weeklong trek through the hidden pockets of central Bhutan’s subtropical lower region. Ideal for beginner hikers due to its moderate winter climate and fairly low altitude ranging 1000-1500 meters, this trek features the foothills of Jigme Singye Wangchuck National Park’s Black Mountains. It passes through the villages of Nabji and Korphu, both known for the locals’ genuine hospitality. Visitors are usually welcomed with elaborate ceremonies (locals may even dress in traditional costumes) that were historically reserved only for royalty. You might also be served up some steaming ema datshi, the country’s trademark chili and cheese dish. Just have a glass of yak milk handy because, well, Himalayan chilis can make you feel as steamy as the dish itself. As you spend seven days admiring white peaks and kaleidoscope wildflowers, remember to look out for the fauna, too. In this region, you may spot red pandas, leopards and the endangered golden langur. This trail is only available during the winter season (October to April), following the monsoon-ridden Bhutanese summertime.

Trail with a minimum elevation of 2500 meters, this is an eight-by-eight trail, spanning eight hours per eight days(though it can take longer). It will take you as high as 5000 meters so it’s important to properly acclimate to the rapid change in altitude. You’ll first touch down at Tiger’s Nest Monastery, dating back to 1692,the country’s most iconic Buddhist temple in the valley town of Paro, located just west of the capital city of Thimphu. The real challenge begins at the map-replacing Paro River, where you should channel your inner explorer; simply follow the river to reach Jangothang base camp. Have a rest while gazing breathlessly (be it from the strain or from the scenery) at Mount Jumolhari, which is the second-highest unclimbed peak in the world. Apart from its nature, (as) if you needed any more reasons to do this trek, you’ll also get a taste of local life as you pass yak herders watching their animals graze the alpine pastures. Continue along winding pathways carved right into mountain rock to the remote mountain settlement of Lingzhi. From here, you’ll steadily begin your descent into the lower valleys of the capital region of Thimphuin Bhutan’s western interior. 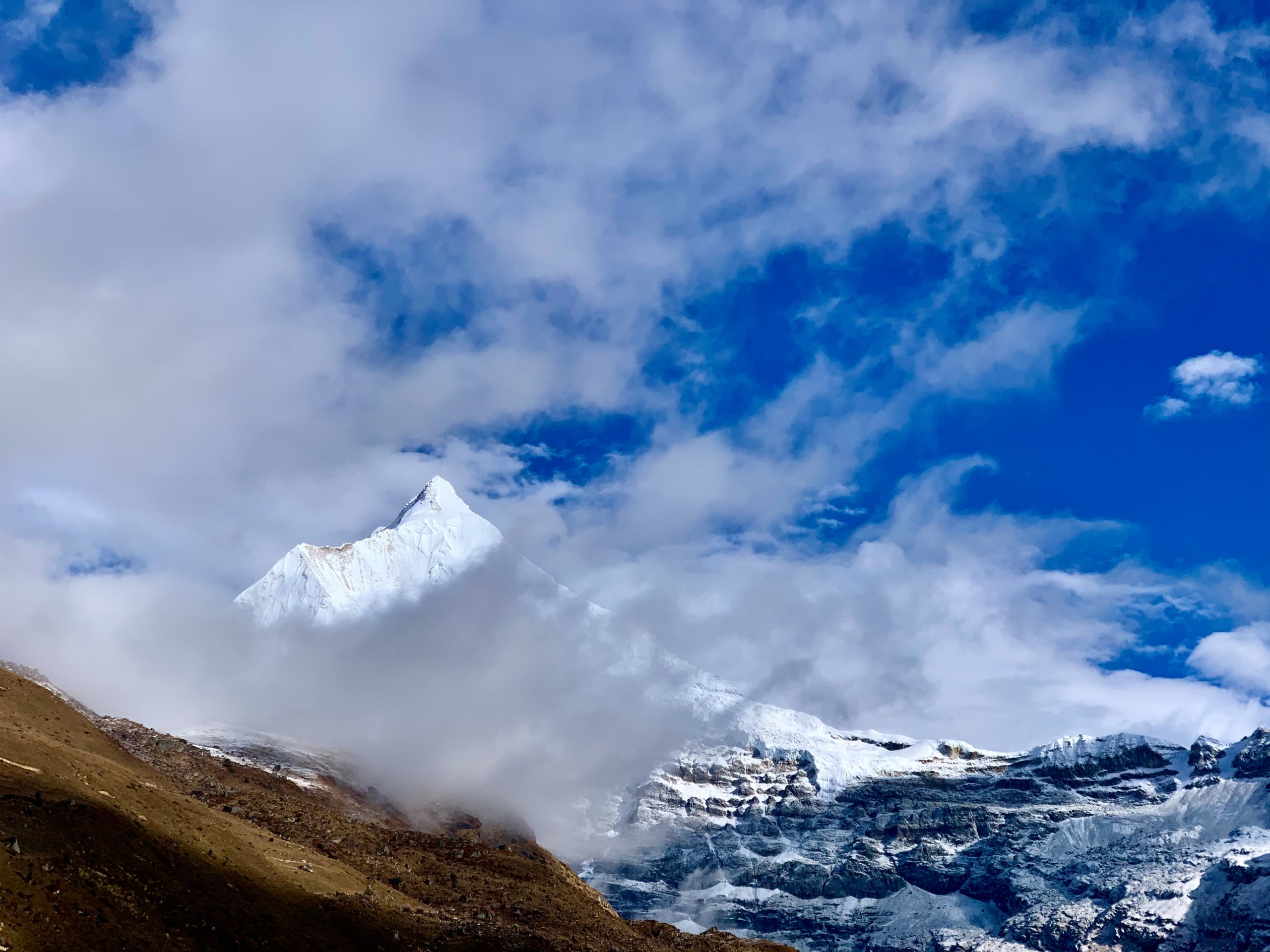 Brimming with crystal-clear glacial lakes, this trek has no secrets hiding behind its name. The Dagala Thousand Lakes trail is located just south of Bhutan’s capital city of Thimphu. As you cross seven kilometres on average each day (that’s around six hours walking), the sheer contrast between the turquoise lakes and rugged white-topped mountains will remind you that this journey doesn’t happen many times in a lifetime. Some of the Himalayas most famed and tallest peaks, including Mount Everest (8848 meters), Jumolhari (7326 meters) and Tiger Mountain (6840 meters), can also be seen from the dazzling Dagala trek. If the Thousand Lakes and their accompanying vistas aren’t enough to win you over, the wild flora and fauna, which the area’s villages live off of and in peace with, will. In particular, the village of Genekha is known for its matsutake and chanterelle mushrooms. This trail is easy-moderate in difficulty, offering amateur hikers a unique chance of catching spectacular views of the Himalayas’ highest and mightiest. The two high passes of the trip, which include stunning Utso Lake at 4300 meters and Dala Tsho at 4520 meters, are where you’ll catch the Himalayan titans as their closest. 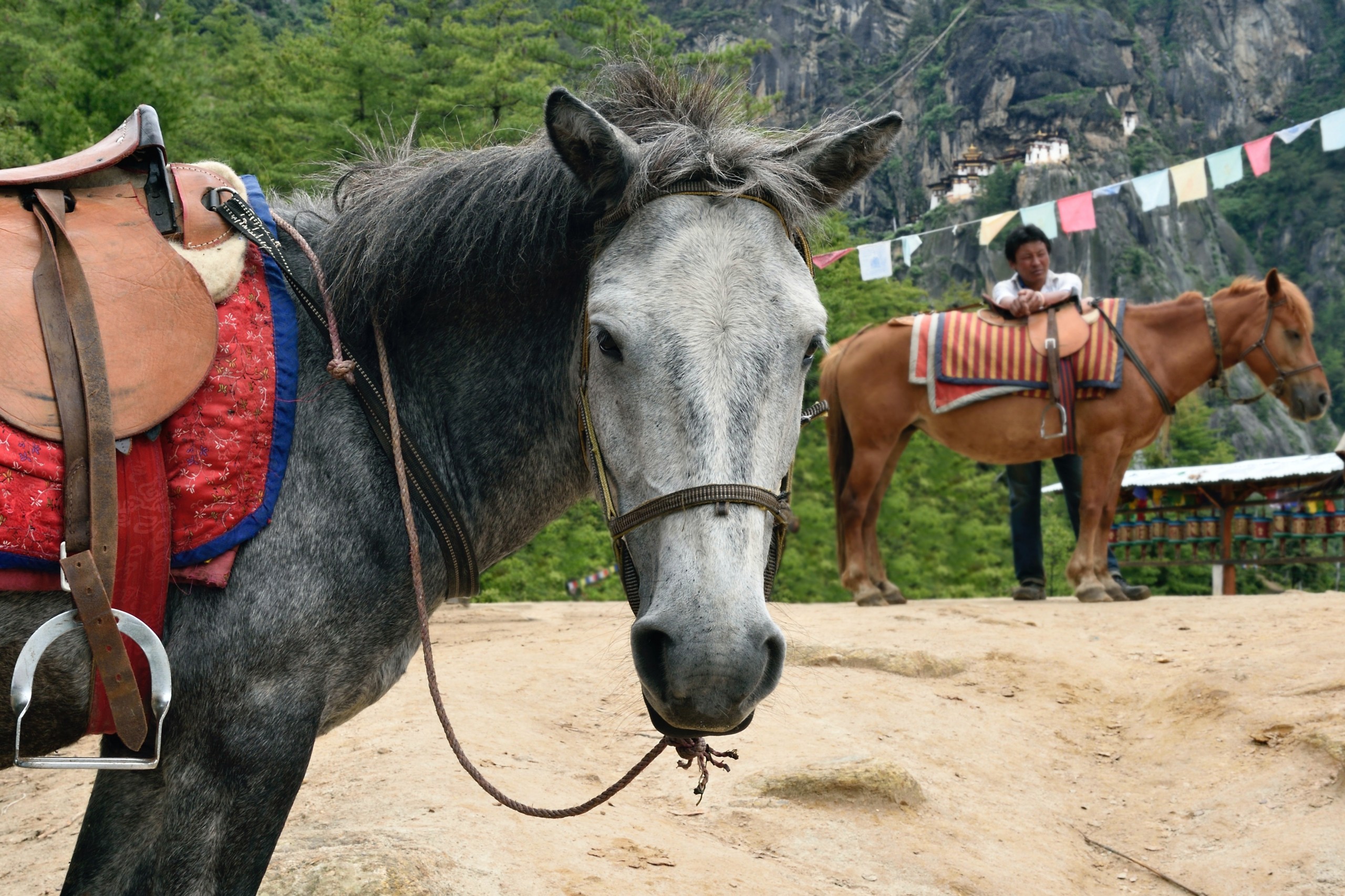 With a moderate difficulty level and a weeklong length, the Druk Path trail connects the valley town of Paro with Bhutan’s capital of Thimphu, both located in inland western Bhutan. This trek is Bhutan’s most popular, featuring a maximum altitude of just over 4000 meters and fairly short distances between camps (requiring around 11 km per day). You’ll follow the path of an ancient trading route, weaving your way through bursting-with-color rhododendron forests and sweet-smelling apple orchards, which strikingly contrast against the background of snowcapped, 2700-meter Mount Jumolhari. Your initial awe will seep into the next four days, beginning at the 4210-meter-high Phume La Pass. From here on out, feast your eyes on crystal-clear mountain lakes, admire altitude-adjusted yaks and views of the Himalayas including our evasive friend, Mount Jumolhari. As you descend, passing forests filled with blue pine and juniper trees, slowly allow yourself to come back down to earth before you reach the outskirts of Thimphu valley. Stroll into Bhutan’s capital (which nonchalantly sits at an elevation of over 2000 meters), to slowly process the astounding beauty of the country’s mountain landscapes. 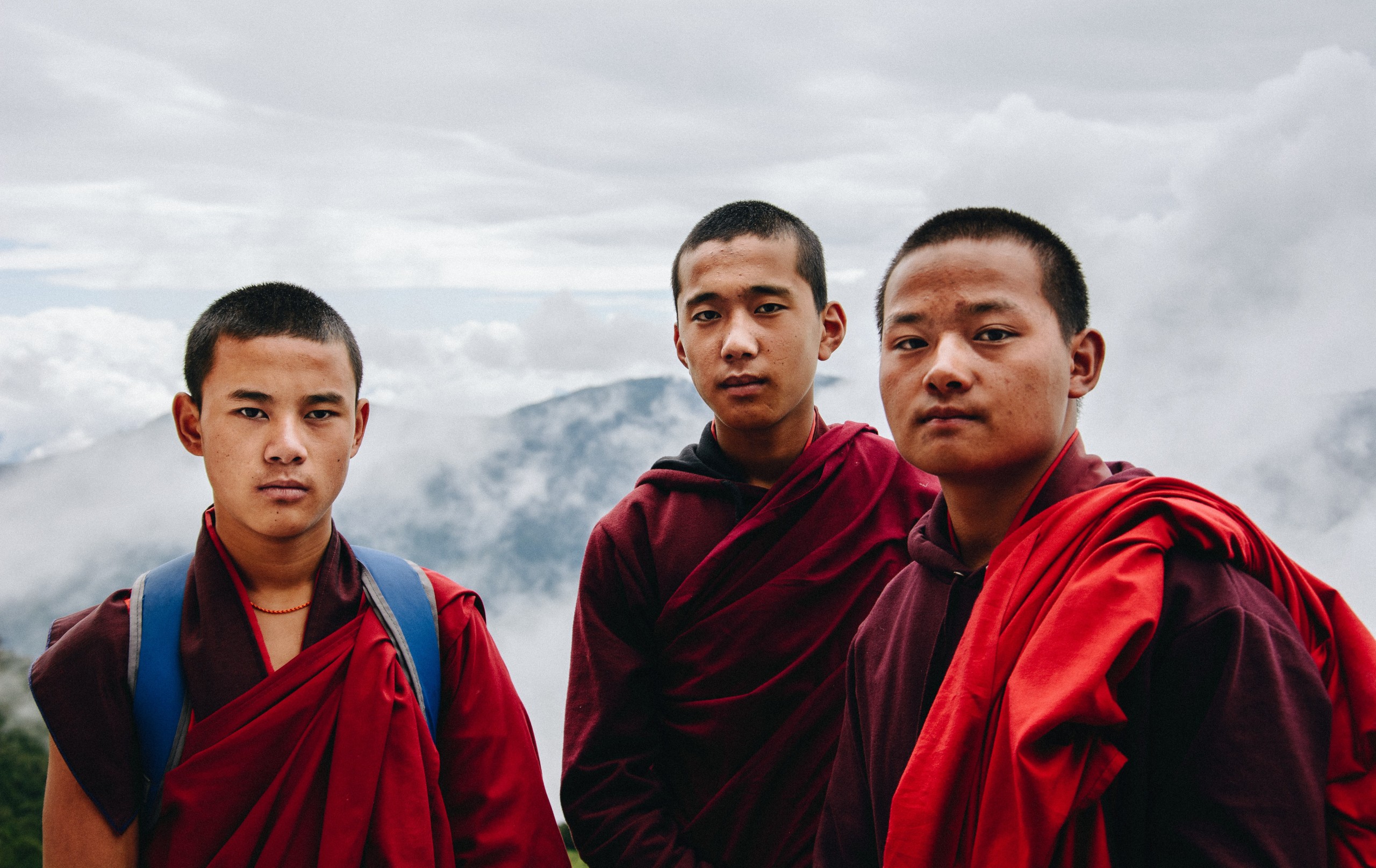 The Snowman trail isn’t for the faint of heart. More ‘Jack Frost’ than ‘Frosty the Snowman,’ this legendary trail is thought to be the hardest in the Himalayas. Supposedly, more people complete the climb to Mt. Everest than this trek. Over the course of three weeks, you’ll be climbing heights of over 5000 meters and crossing glacial streams. You may get cold, you could feel tired, you might experience altitude sickness – but it’ll be one of the most amazing experiences of your life. Head out between September and October (late enough that the summer monsoon season has passed, early enough to beat the snow storms) and in around 30 days, you’ll have traversed the underside of northwest Bhutan’s border with Tibet. Midway through the trek, between gazing at Himalayan peaks and marvelling at yaks unfazed by the terrain, you’ll have a chance to rest in a remote village and taste local treats. See if you can get your hands on some arag, a fermented drink made from local rice, maize or wheat; the taste is something like sake on steroids. Refreshed, continue on to see ancient Buddhist monasteries and tshachu, natural hot springs (Bhutan has around ten across the country). To successfully finish the trek, which ends in Thimphu, try channelling the blessings of the many colourful prayer flags you’ll find billowing in the Himalayan winds across your paths. 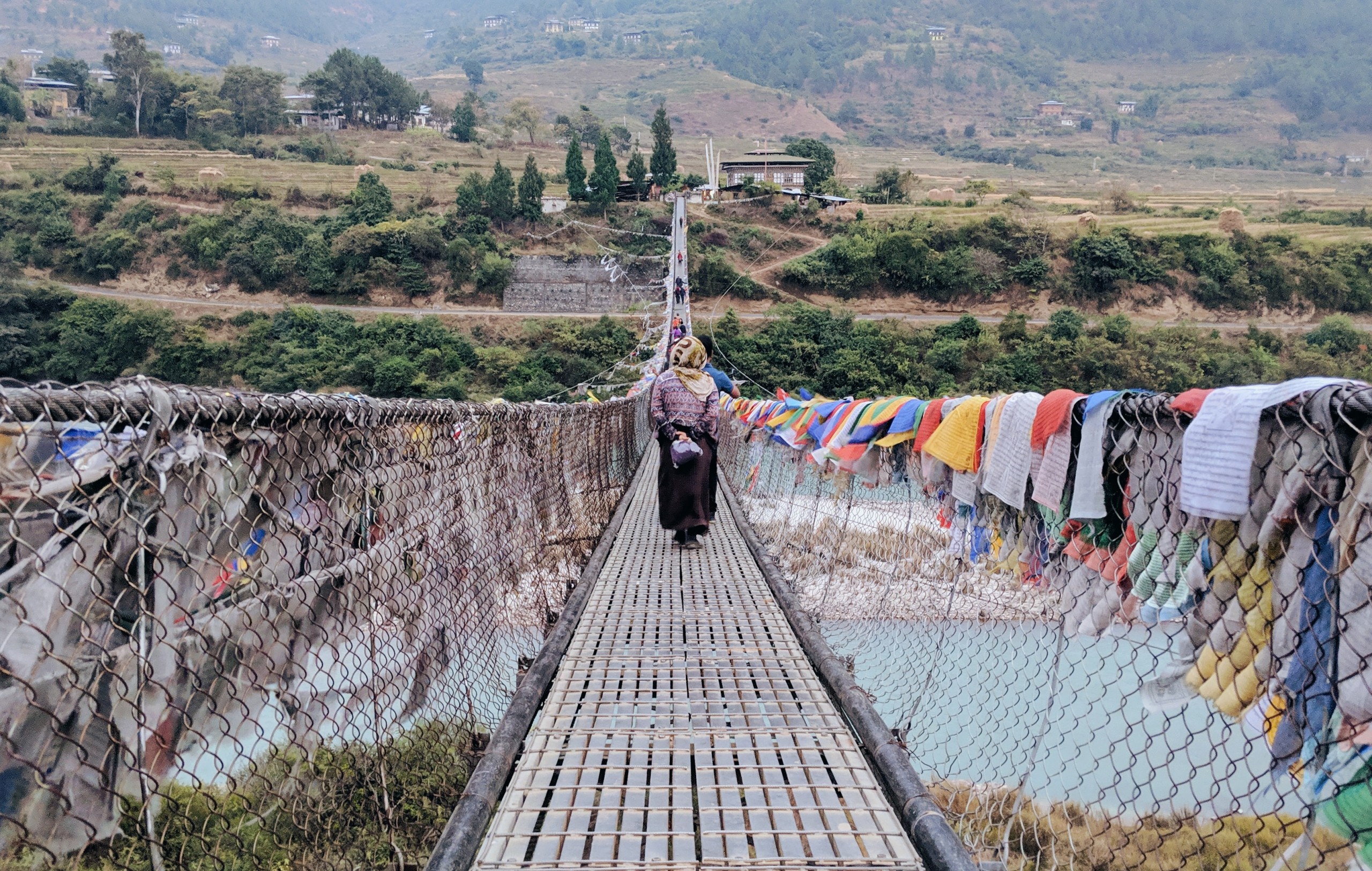 Bhutan luckily has a trail for everyone, so if a three-day hike as beautiful but much easier than the Snowman is more your speed, the Bumthang Owl is perfect. This trek loops around the central Bumthang district which, home to Bhutan’s most ancient temples and monasteries, is the country’s most sacred. Don’t miss the Jambey Lhakhang temple, thought to have been constructed in the 7th century AD by the Tibetan king Songtsen Gampo. Bumthang is also home to four wildflower-blanketed mountain valleys: Ura, Chumey, Tang and Choekhor, which were carved out over the centuries by ancient glaciers. Here, rice and buckwheat fields mingle with apple orchards under canopies of blue pine, birch and bamboo. But the trail’s main features don’t just include its fascinating flora. Pheasants, such as the Himalayan tragopan, also make these valleys their home, along with their furrier and more ferocious counterparts, the Himalayan black bears. High above the sprawling lowlands, all bursting with life, stands guardian Mount Gangkar Puensum; at 7570 meters, it’s the highest unclimbed peak in the world. Visit this temperate zone of the country between March and December, but also consider the period when rhododendrons overrun the valleys, in the best way, between April and June.

Bhutan is an alpine arcadia, a passageway to a temperate and tropical state of bliss. As you explore the country, meditate on a quote by mountaineer John Muir: “Between every two pines is a doorway to a new world”.