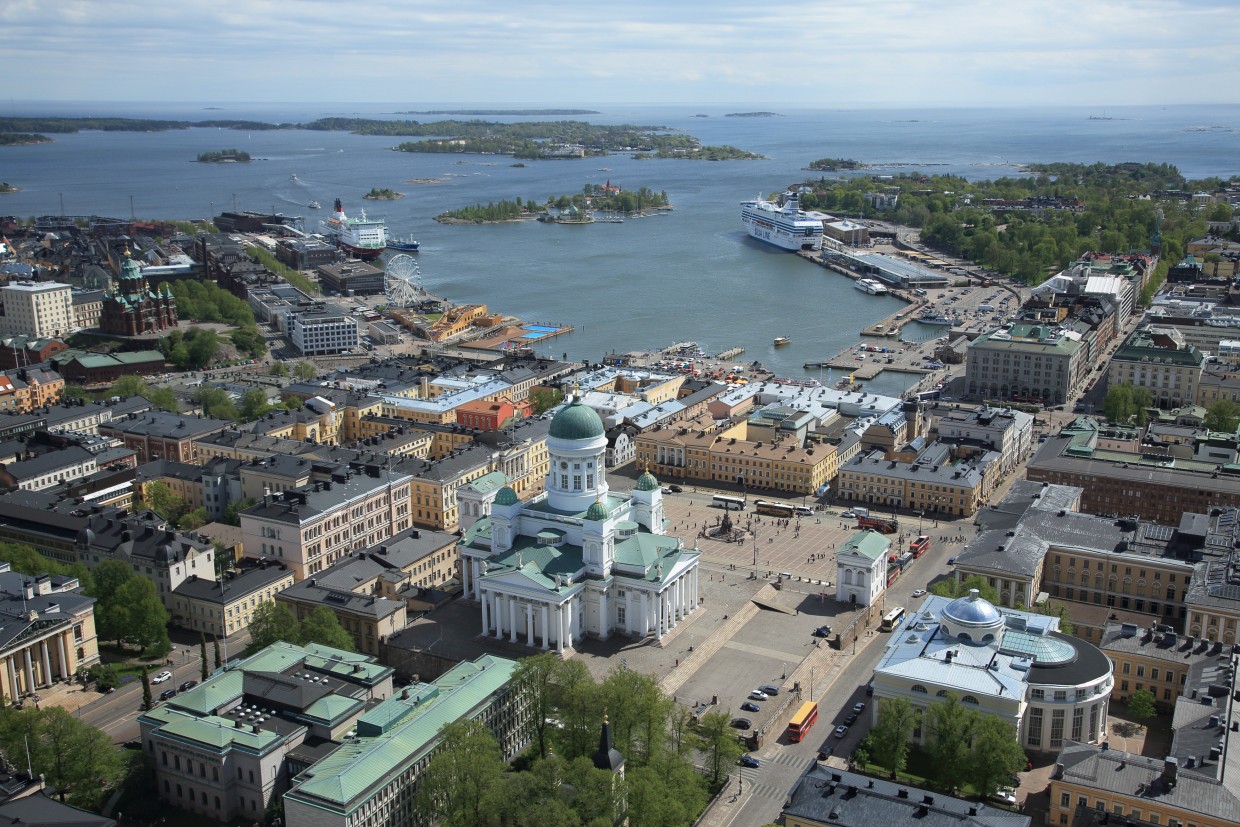 The finest of Europe’s small cities possess an enviable style that gets lost in a bigger metropolis: a core of proud individuality married with community developed over centuries, a shared history, a sense of space and place. Helsinki is an exemplary example, a quintessential melding of glorious architecture, world-beating design, innovative home-grown cuisine, shopping, saunas and sea, superb green spaces and diverse night life.

Modest by world standards (there are less than 1.5 million people in the Greater Helsinki area), Helsinki constantly punches above its weight and has one of the highest urban living standards in the world. It also has a plethora of world-class galleries and museums, much more than you would expect for a city of its size, as well as the largest concentration of Art Nouveau buildings in Northern Europe and an understandable pride in its innovative design pedigree. In 2012 Helsinki was named the World Design Capital, and in 2014 it was awarded City of Design status as part of the Creative Cities Network established by UNESCO. 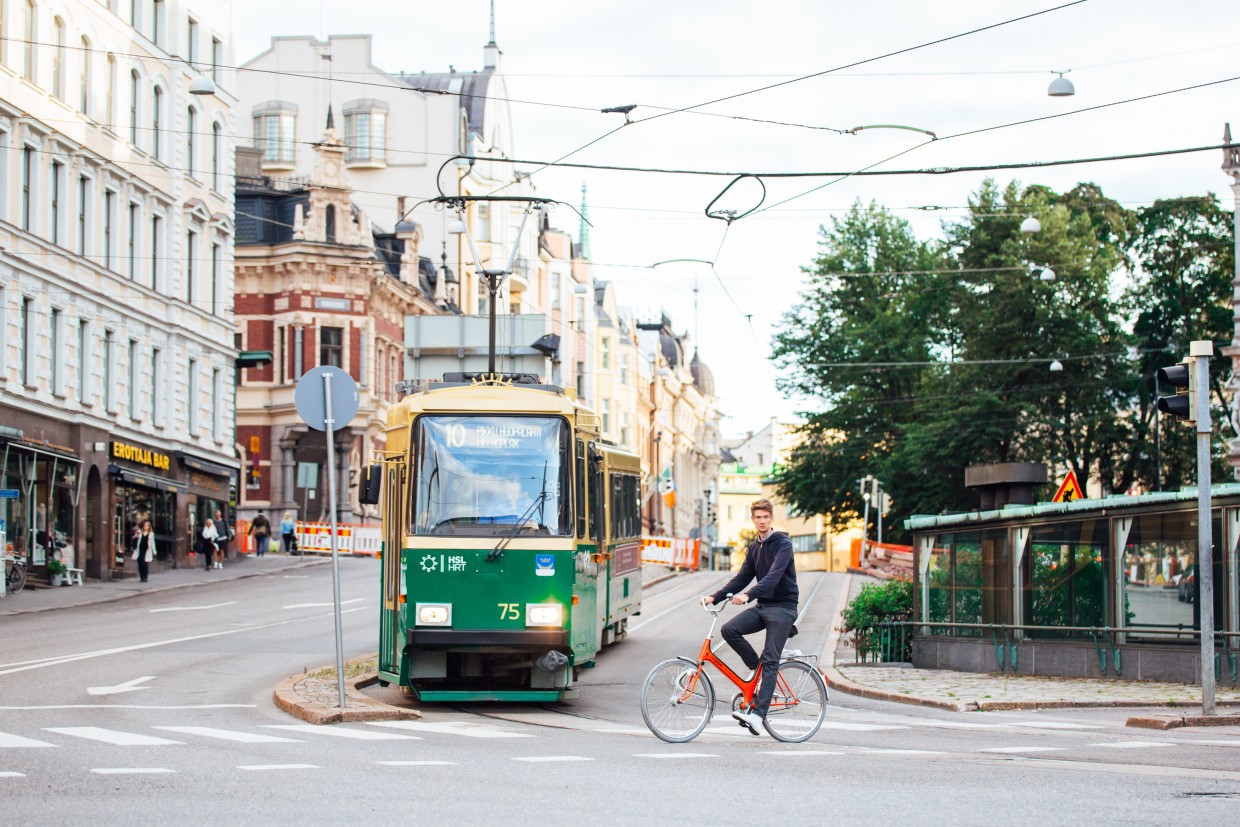 Finns are friendly and hospitable and often impeccably fluent in English in addition to Finnish and Swedish. The city centre is small enough that you can have a good sense of your surrounds in a couple of days, is well set-up for walking, and boasts one of the best public transportation systems in the world. Bicycles are also available to hire for just EUR10 per week.

The perfect place to start is Helsinki’s green heart, Esplanadi. This tree-lined continental-style promenade is an obvious socialising and people-watching spot, and comes alive in the warmer months with ice cream vendors, locals lounging on the grass, buskers and market-style stalls. Designed by Helsinki’s principle architect Carl Ludvig Engel in the early 19th-century, Esplanadi contains one of the city’s most historic restaurants, Kappeli, established since 1867 and serving classic Finnish fare. Close by, Espa Stage regularly hosts numerous artists and groups from May through August. And the promenade is surrounded by high-end international and Finnish stores, including world-renowned Finnish glass and tableware company Iittala and prominent textile house Finlayson founded in 1820. 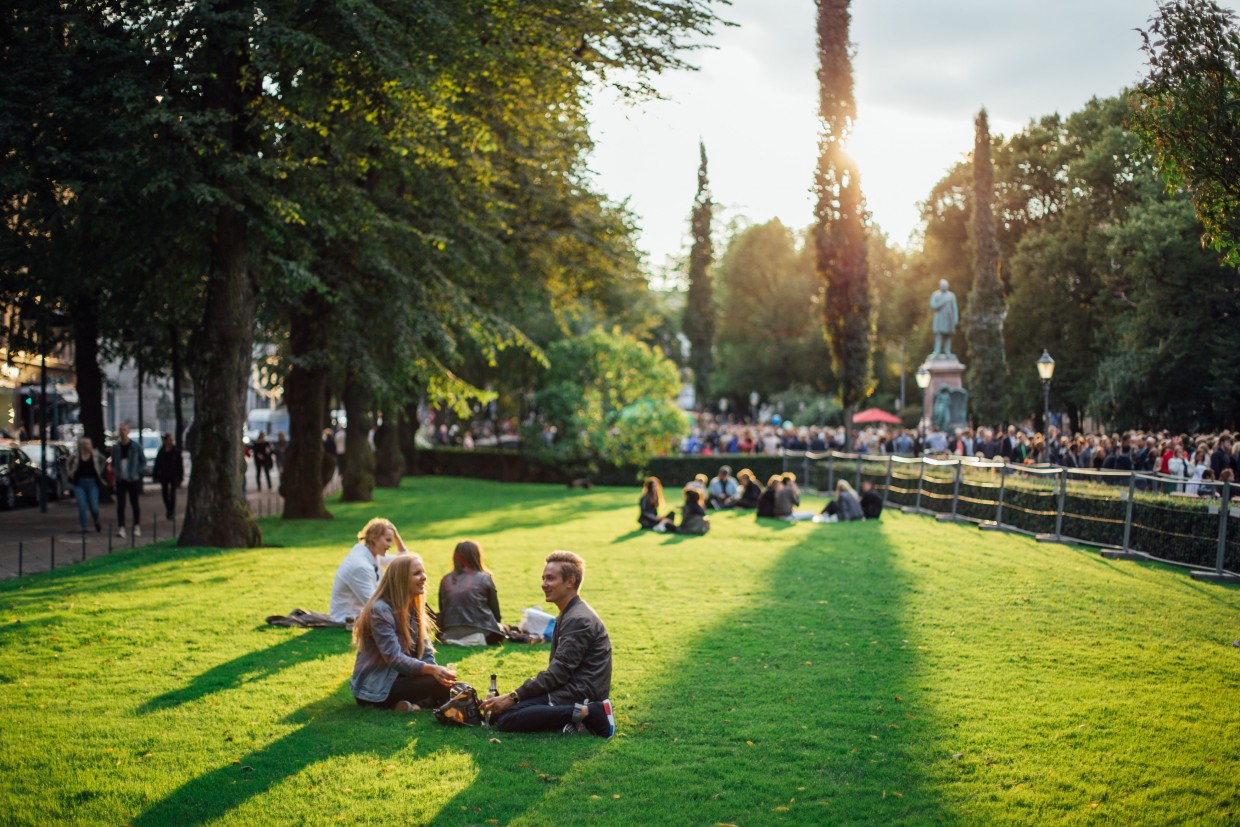 Overlooking Esplanadi is Helsinki’s premiere place to rest one’s head, five-star Hotel Kämp, which has hosted the Rolling Stones and Bruce Springsteen and offers plush lodgings in an authentic and supremely central setting.

Wander to the coastal end of Esplanadi and you’ll find yourself at Market Square, a year-round outdoor market on South Harbour which sells a wonderful array of hand-crafted items. Here you can haggle over genuine reindeer furs and sample no nonsense, strong Finnish coffee.

Continue along the harbour and you will soon reach Helsinki’s 40-metre SkyWheel, which offers panoramic views over the city, sea and the surrounding islands. From South Harbour, take a ride of a different kind on a ferry or pleasure cruise to one of Helsinki’s numerous islands – the long coastline has more than 300, many of which are accessible for recreational use. As well as the UNESCO world heritage site and former fortress of Suomenlinna which is well worth visiting, there are plenty of smaller islands that feature sea-view restaurants and saunas. Visiting Lonna Island is a particularly idyllic experience. Here you can dine al fresco on local seafood and in-season vegetables under magical skies and even grab a sauna if you fancy. 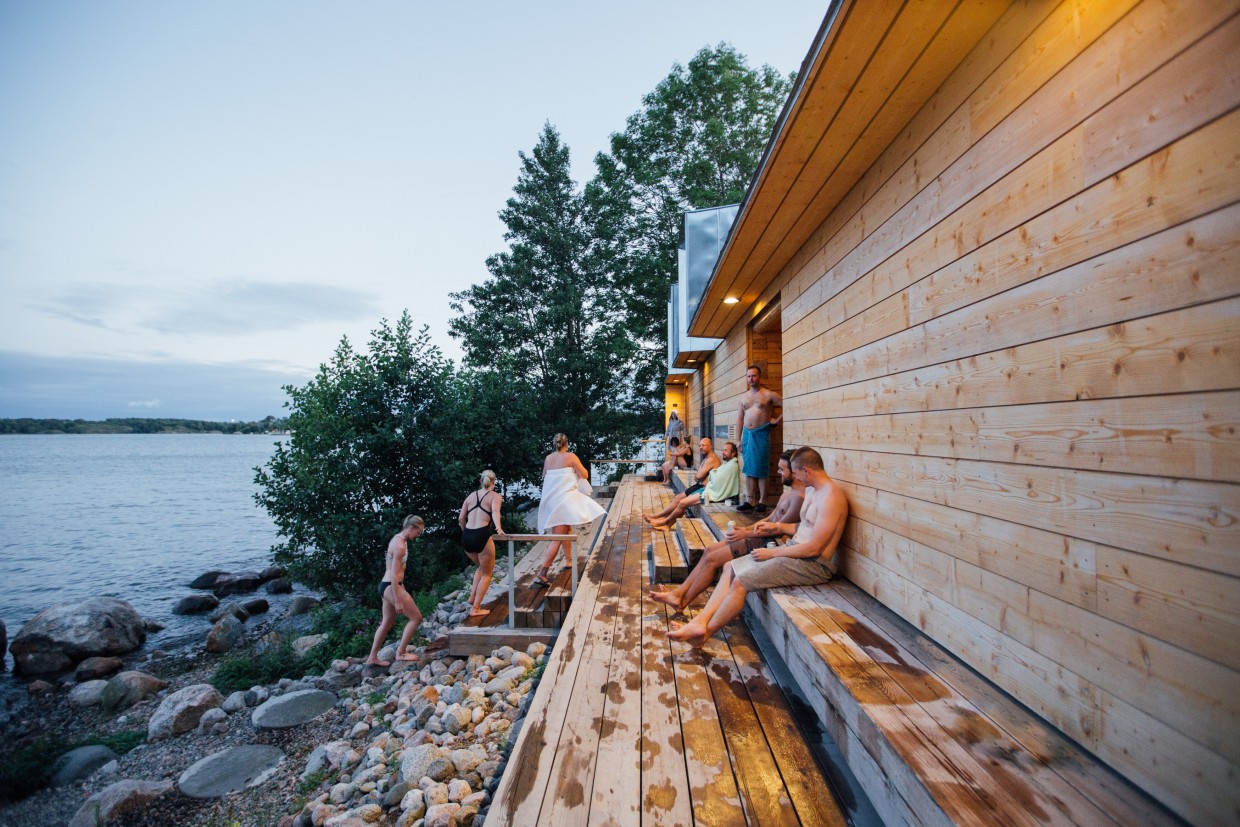 To further explore the serene waters around Helsinki, the 1½-hour sightseeing cruise operated by CityTour is highly recommended. The spacious modern boat, complete with restaurant and bar, journeys around Suomenlinna and along the picturesque harbour front, past formidable looking icebreakers, traditional sailing ships and international cruise liners. A combined boat and bus hop-on hop-off ticket costs EUR35 for a day.Head inland to get a feel for Helsinki’s urban culture, as well as its international reputation for ground-breaking design. A couple of tips: Firstly, one of the best ways to appreciate the gorgeous streetscapes is to take a guided walking tour – Helsinki Marketing organises a diverse range, from a free walk around the main sights, to a Design Walk, a Finnish Food Walk and tailor-made itineraries. You may think this isn’t necessary in such an easily navigable city, but (echoing Finnish design) there is much detail to be seen that is not immediately obvious. Exquisite art nouveau streetscapes, houses that look like castles, animal sculptures imbedded in buildings, hidden courtyards and a wooden door intricately carved with the face of a wind god are just some of the treasures that you’ll see on a guided tour. Helsinki Marketing’s website is a superb resource for planning your visit to the Finnish capital. Secondly, buy a Helsinki Card for free entry to most of the city’s galleries and museums (each of which typically charges EUR10), free sightseeing tours, free public transport and discounts to restaurants, shops and attractions.

If Esplanadi is Helsinki’s heart, then the Design District is almost certainly its soul. Finnish design is increasingly being recognised worldwide for its sweet combination of beauty, functionality and sustainability. The Design District incorporates this in both ‘a neighbourhood and a state of mind’, encompassing twenty-five inner-city streets and two hundred creative businesses, from cutting-edge boutiques, artists’ studios, vintage shops and pocket galleries, to restaurants serving organic fare and achingly hip boutique hotels. 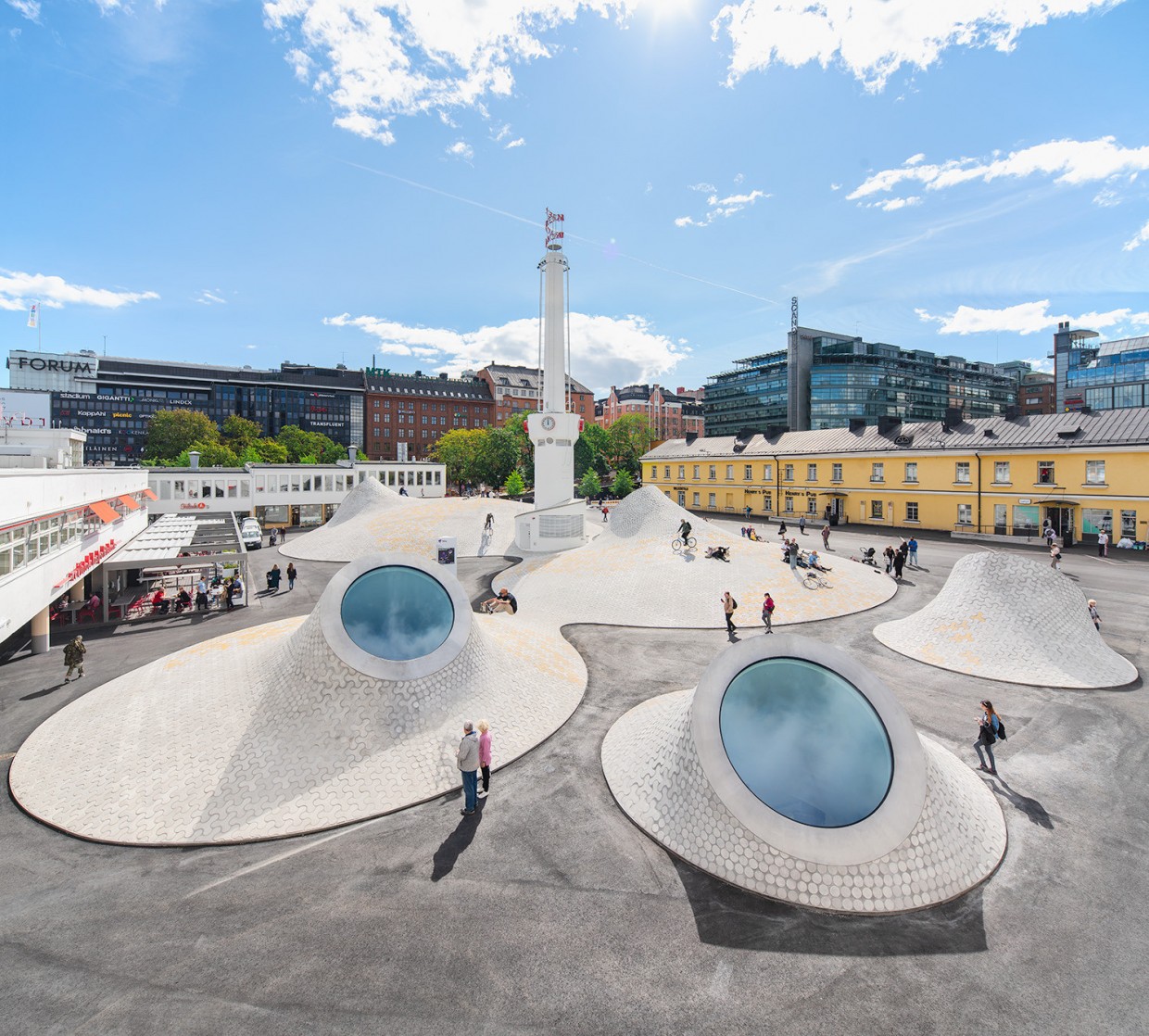 At a time when many big cities are lamenting the demise of funky independent retailers due to the seemingly unstoppable march of international chains, Helsinki is doing the complete opposite. Iconic Finnish brands (such as modernist furniture pioneer Artek and fashion house Marimekko) rub shoulders with start-ups and the next big things. Head for Artisaani, LOKAL and Softrend for home décor and textiles; the Pure Waste Concept Store and Vietto for ecologically-sound clothing, and Galleria Mafka & Alakoski for contemporary local glassware. The four-neighbourhood district also encompasses the Design Museum and the Museum of Finnish Architecture. In addition, Helsinki Design Week is held every September.

After browsing the Design District, it’s time to appreciate the aesthetics of Helsinki’s architecture. Even to the untutored eye, is not hard to see why it is so celebrated.  Telling the story of the city, the mix of numerous styles somehow work as a harmonious whole, Senate Square being the star turn of Engel’s grand city plan. Presided over by suitably impressive Helsinki Cathedral, the square was finished in 1852 as a tribute to the Grand Duke of Finland, Tsar Nicholas I of Russia, and is flanked by the Government Palace and Helsinki University’s main building. Nearby is the Tori Quarter (Torikorttelit), where neoclassical buildings have been revitalised with modern day amenities and food and beverage venues.

The influence of Art Nouveau at the start of the 20th-century came at a pivotal time when Helsinki was being developed and modernised, resulting in picturesque streets of houses that look to have come straight out of a fairytale, complete with turrets, cupolas and gargoyles, especially in Katajanokka and Ullanlinna. Wandering these streets is a photographer’s delight as each building is endearingly unique. Helsinki Central Station is a prominent example of the style; the master work of Finnish architect Eliel Saarinen, the 1919 building is considered one of the most beautiful railway stations in the world.

The importance of saunas to Finnish culture cannot be over-estimated, so it would be verging on criminal to visit Helsinki and not partake at least once. The architecturally stunning EUR6.5 million Löyly complex, in a prime position on the city’s waterfront, is the place to sauna in style. Löyly’s public and private saunas, multiple levels of outdoor terraces, rooftop deck and restaurant are all beautifully designed to make the most of the breathtaking, sweeping views across the bay, and the complex was name-checked as one of “The World’s 100 Greatest Places of 2018” by Time magazine.

Functionalism and modernism have also stamped their influence on Helsinki. One of Finland’s best-known architects and designers, Alvar Aalto, considered to be the father of Finnish Modernism, was the mind behind Finlandia Hall on Töölönlahti Bay. The sleek white concert hall, with its cathedral-like roof and nature-inspired interiors, was completed in 1971. Also worth visiting is Temppeliaukio Rock Church in Töölö. As the name implies, it is hewn out of solid rock and crowned with a copper-lined dome. Built in 1969, it is often used for concerts due to its superb acoustics. 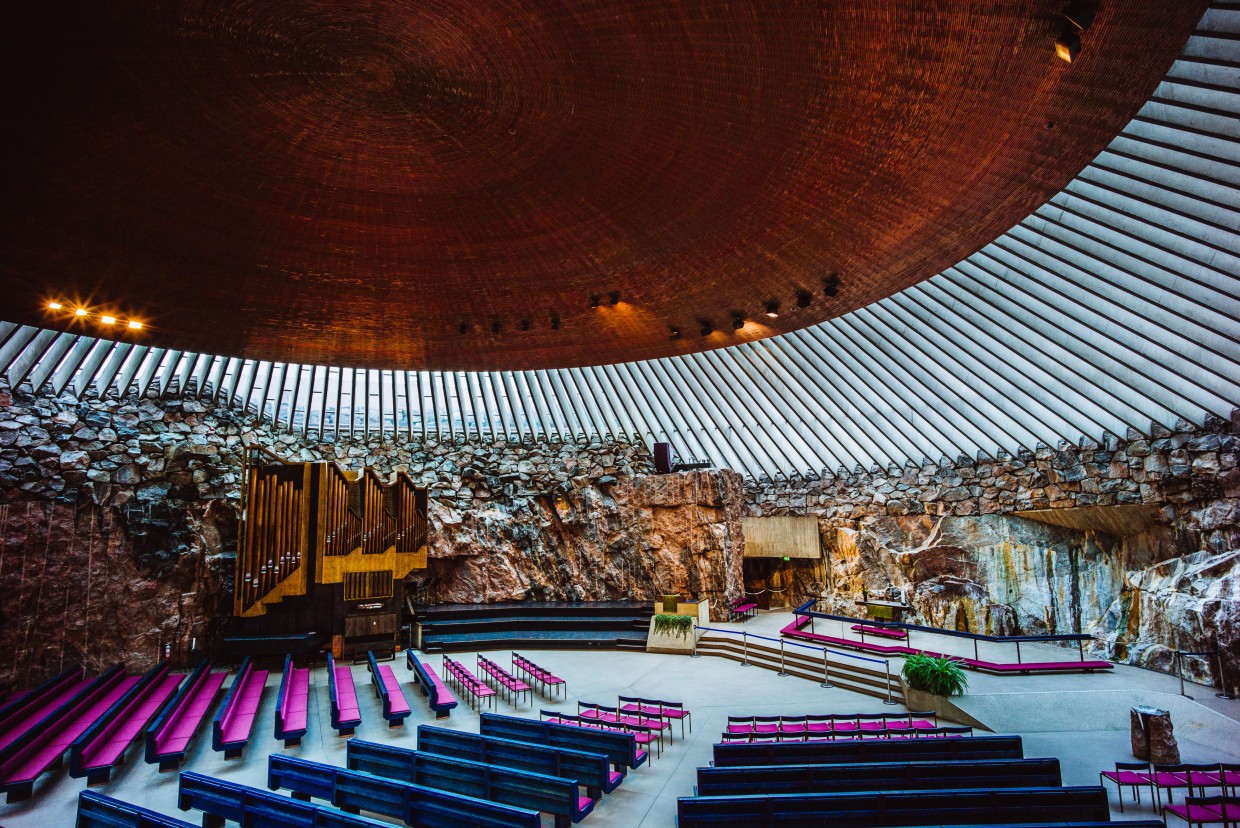 The city’s dynamic foodie scene is another attraction for discerning travellers. In line with Helsinki’s design culture, most food-driven venues are typically individual and managed by passionate Finns who deftly combine international trends with home-grown flavours and methods. World-class haute cuisine is available in abundance, but it is largely presented without pretentiousness. The focus on sustainability is key: using local, organic and in-season produce is not a fad here. Seafood is naturally a big focus, and chefs make liberal use of nutrient-rich, flavoursome wild berries (such as lingonberries, cloudberries and sea buckthorn) which are also used to garnish cocktails and spirit-based drinks. Don’t miss top-end restaurants Savoy and Chapter for memorable gastronomic experiences; Holiday for a bright and fun al-fresco meal and über-cool Yes Yes Yes for the best vegetarian food in the city. For drinks, The Helsinki Distilling Company and onsite bar Tislaamo are not to be missed, and where you’ll find the best G&T in town.

Helsinki provides a constant stream of surprises and delights and enamours at every opportunity. Every nook and cranny of the city is truly worthy of investigation, which cannot be said about many of Europe’s capitals. Cobbled streets yield design stores, fabulous galleries and marvellous architecture. Dining experiences touch and enthral every taste bud. And the waters which surround the city provide a serene and embracing backdrop. If you visit one Nordic city in your lifetime, let it be Helsinki in the summer. You will undoubtedly leave both spoiled and enchanted by its pristine and uncomplicated charms.