Catch a Blessing in the Bhutanese Breeze
VEEN Scene 010 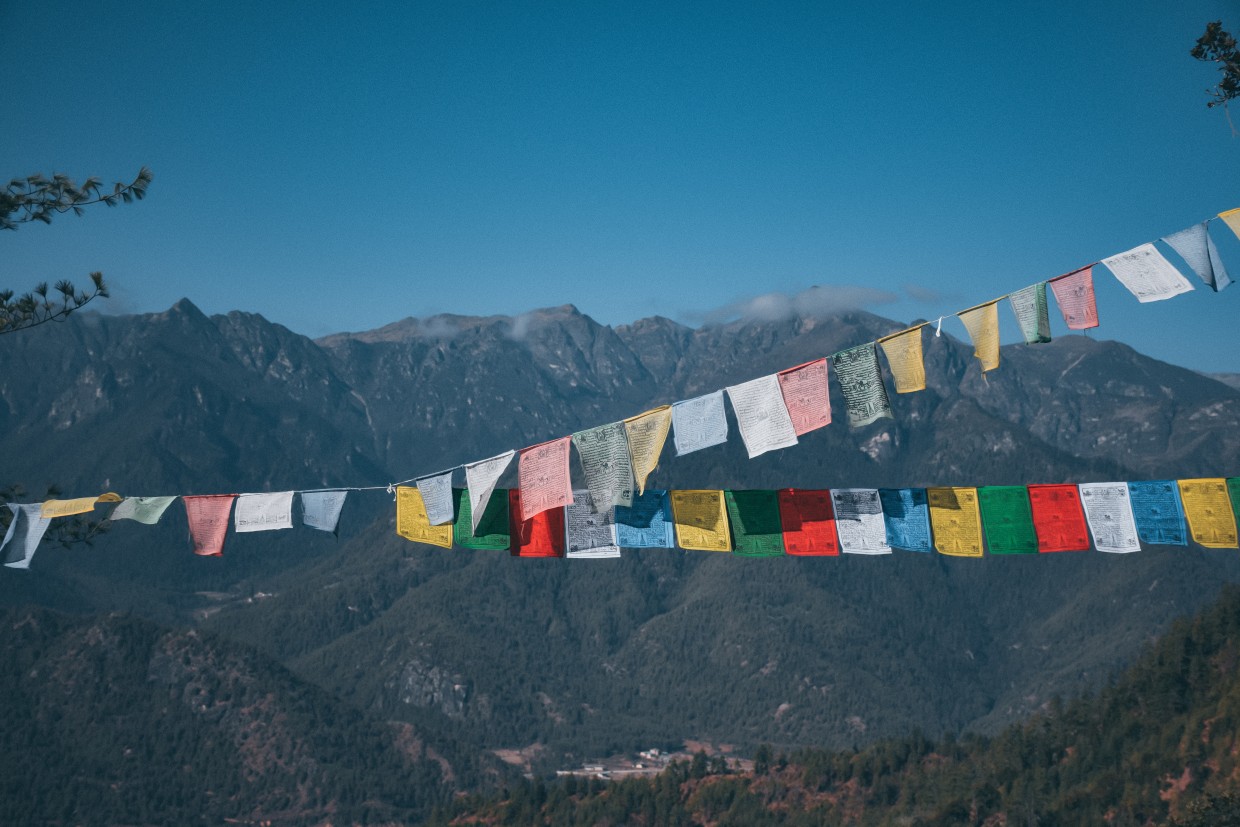 Being remote and pristine as it is, Bhutan is often seen as isolated. Its first road was built in 1960 and phones and TVs arrived only in 1999. But it was Bhutan’s prayer flags that have kept it connected for centuries, spreading magic throughout the world and back.

There’s magic in the Bhutanese air. Regularly topping “world’s happiest countries” lists, Bhutan is also the only carbon-negative country in the world—and it holds the title of global biodiversity hotspot. If that’s not proof enough of the country’s mojo, envision trekking down a verdant Bhutanese mountain path. Sun warming your back, wind whistling through the surrounding broadleaf trees, you stop to take in the alpine landscape dotted with fortress-monastery dzongs, Buddhist shrine chortens and pastures full of grazing yaks. Then, an enchanting distraction—sprinkled across the medley of earthy colors you notice standout pops of bright red, yellow, blue, white and green.

Characteristically colorful prayer flags are not your average pretty pieces of cloth; they carry out a meaningful duty in Bhutan. They’re etched with texts and symbols for wisdom, peace, happiness and strength—and tasked with dispersing those blessings onward, through the wind. A cool Himalayan breeze is enough to do the trick. Traditional beliefs claim that when prayer flags begin to flutter, their messages are carried far and wide, bringing good fortune to not just locals but all sentient beings on earth. Flag texts are written in the form of prayers, sutras (Buddhist prose containing the Buddha’s enduring 2500-year-old teachings) and mantras (sacred, power-laden words and phrases). Various symbols accompany texts—a typical, front-and-center emblem on prayer flags is the wind horse. This beast of burden is an ancient symbol of strength, speed and ability to transport cargo; in this case, of course, breeze-blown blessings. 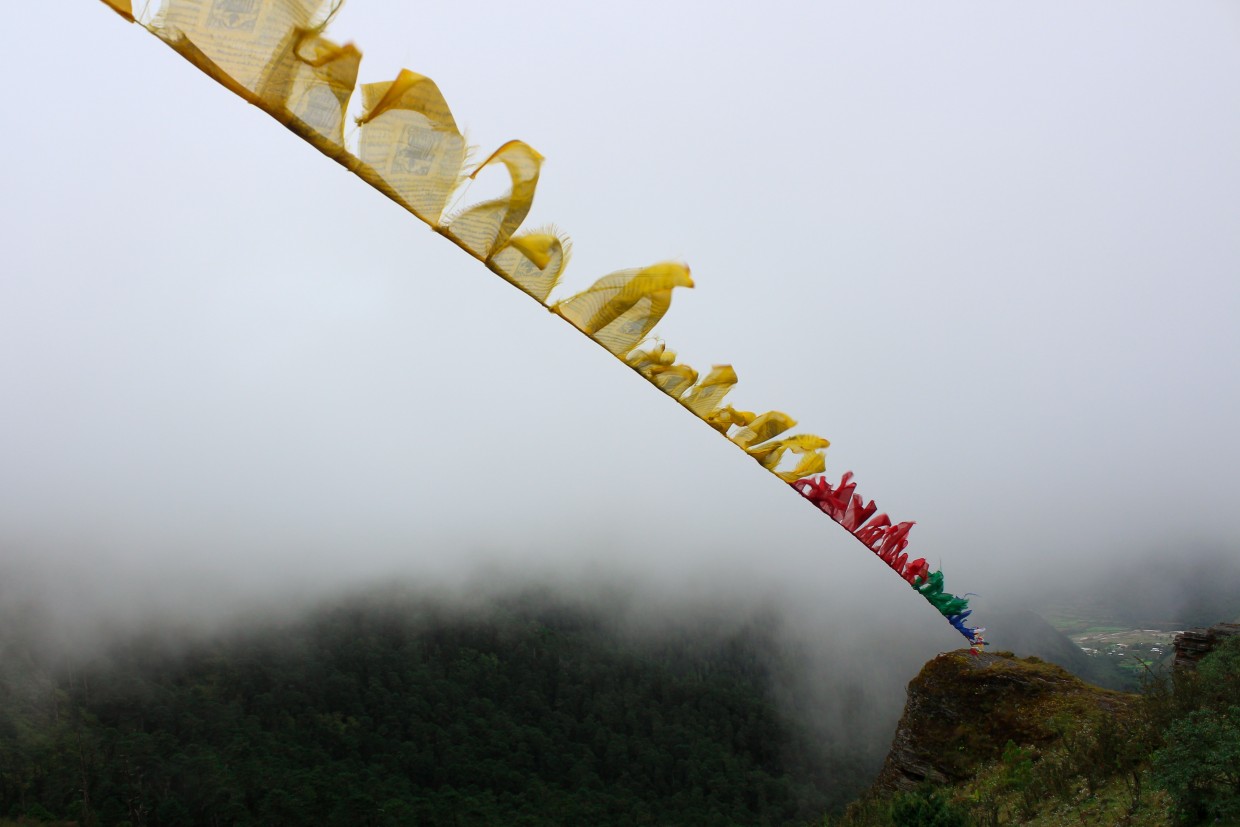 Gracing towns and mountain paths, prayer flags are of the outdoorsy type—they’re always outside, and it’s not only to be closer to the wind. From snowcapped Himalayan peaks to subtropical forests and crystal-clear lakes, Bhutan’s natural wonders are thought to double as local spirits’ sacred dwelling places. In the olden times, prayer flags were hung near such natural sites in order to appease the deities; otherwise, natural disasters and diseases could run rampant. Prayer flags served as a spiritual olive branch, a way of coexisting with nature. The picture-perfect, color-bespeckled mountain landscape is no cause for complaint today either. Prayer flags set against a striking natural backdrop are part what makes Bhutan such an extraordinary place, and a coveted travel destination. 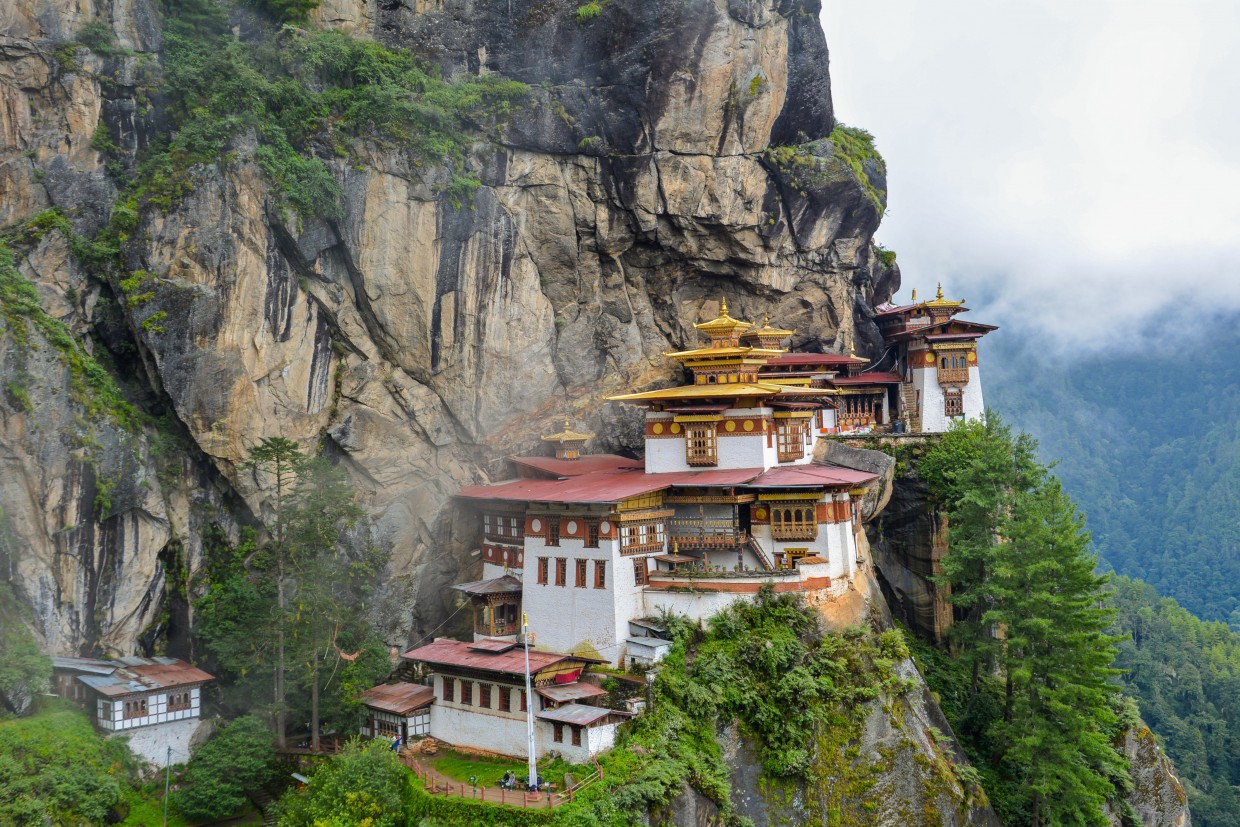 Being remote and pristine as it is, Bhutan is often seen as isolated. Its first road was built in 1960 and phones and TVs arrived only in 1999. But it was Bhutan’s prayer flags that have kept it connected for centuries, spreading magic throughout the world and back. Once part of an ancient Himalayan folk religion, prayer flags were absorbed with the spread of Buddhism across the area in the 8th century—which is the area’s dominant religion today, practiced by 75% of Bhutan’s population. Days of old saw prayer flags hand-painted using soot-infused ink and carved woodblocks. Some still inscribe the flags using the age-old technique, though there are now plenty of options to buy prayer flags off the shelf. But keep in mind—giving and getting prayer flags as a gift, rather than purchasing to own, is favored in Bhutanese culture. In accordance with Buddhist belief, gift exchange is an important way to create bonds.

The Bhutanese lucky charms’ signature style is four-sided and cotton-sewn, swaying either horizontally (strung along a rope) or vertically (attached to a wooden pole, ranging from 3 feet to 40+ feet). Prayer flags come in five symbolic colors. In a place where the natural and the spiritual like to mingle, each represents an element: green for water, yellow for earth, blue for sky, red for fire and white for air. Vertically displayed white prayer flags hold special meaning, signifying the passing of a loved one, and are reverently planted by relatives to protect the soul entering the next life. The white flags are also meant to guide souls into the upper, human realms of reincarnation, protecting them from the three lower realms—hell, ghost and animal.

“You may spot many of the cluster of 108 white prayer flags in Bhutan; this signifies it is in memory of the deceased and it is hoisted within 49 days after the demise. It is believed that this will help clear the path while the Lord of the Death is weighing the good and bad deeds of the deceased and deciding the afterlife accordingly,” explains Lotay Rinchen, owner of Bridge to Bhutan, a social enterprise that designs and leads custom journeys in Bhutan. “I hoisted those flags for my late father in 2006 and it took several members of my family several days—from obtaining the permit from the forest bureau to cut down pine trees from designated areas to hoisting the 108 prayer flags.”

Even as they inevitably fade and fray, fully bearing the brunt of the elements they represent, prayer flags aren’t simply taken down at the first sign of deterioration. Instead, wear and tear is encouraged, showing that the flag has done its job. Plus—it reflects a Buddhist belief that all is temporary and transformation is a key part of the ever-revolving cycle of life. Prayer flags are never allowed to touch the ground, so once they fully deteriorate they’re properly burned, with the smoke carrying their messages away on one final breezy journey. The cycle can then start afresh, with new flags being erected and teaming up with the wind to carry out their sacred duties. Handling the flags—whether taking them down or putting them up—is all about respect. They’re holy in Bhutanese culture after all, and a handler’s intentions should never be concerned with self-gain, but always with universal good vibes. 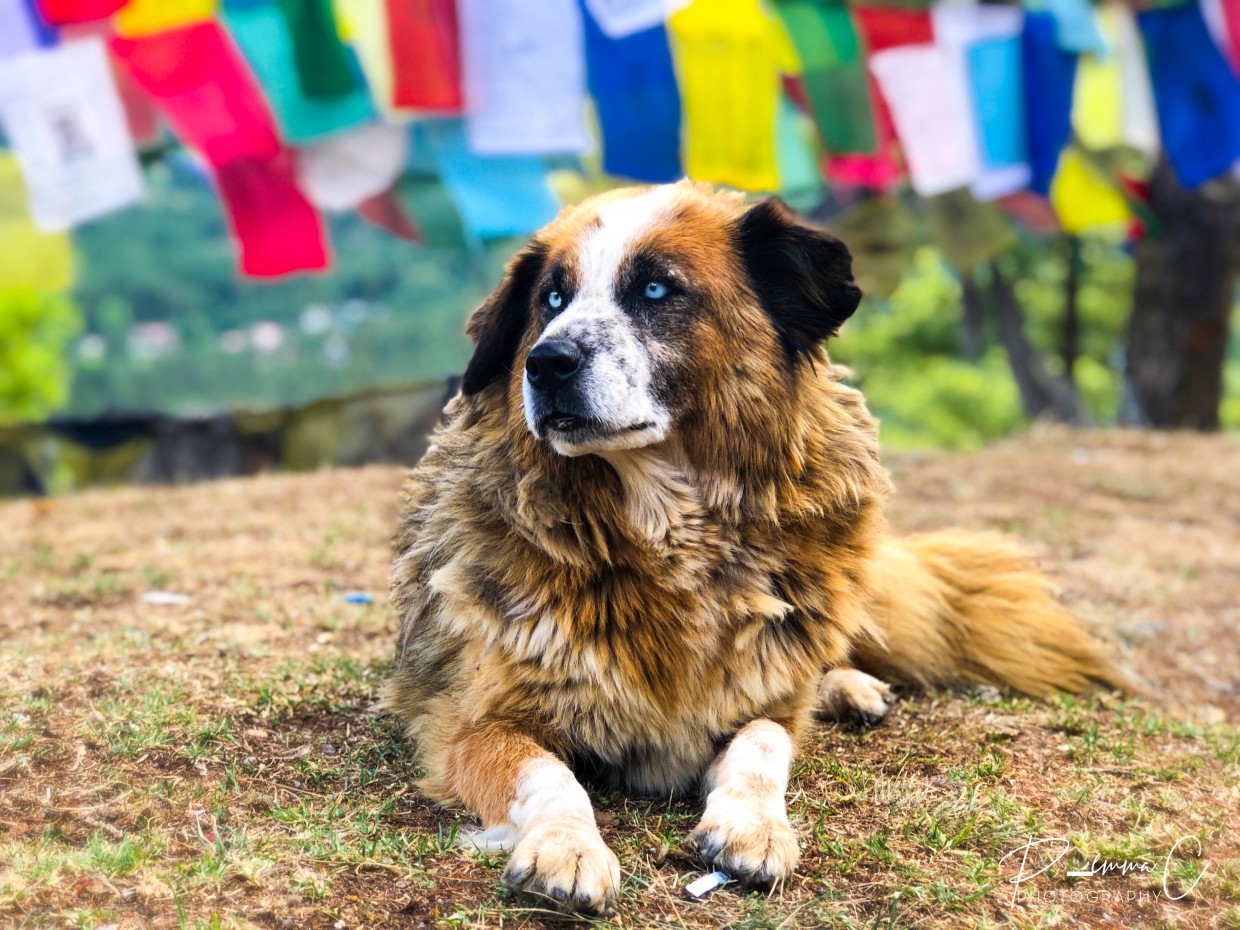 Follow the magic in the air to Bhutan. Whether you’re seeing the last Buddhist kingdom of the Himalayas by foot, car or vehicle, characteristic flashes of color whirling in the wind are sure to catch your eye. Remember to pause and fully feel the presence of the prayer flags. Enjoy the sound of the breeze blowing blessings and fanning fortune to all. Pair this with the echoing Bhutanese bird song and you get a true Himalayan symphony. Don’t be surprised if you’re feeling unusually at peace or downright giddy during your trip to Bhutan, or if you get lucky and a friendly stranger offers you a cup of home-made yak butter tea. Maybe the streak of good fortune will even follow you home in the wind.